Light, water and social change – “The House of The People” in Uniejow 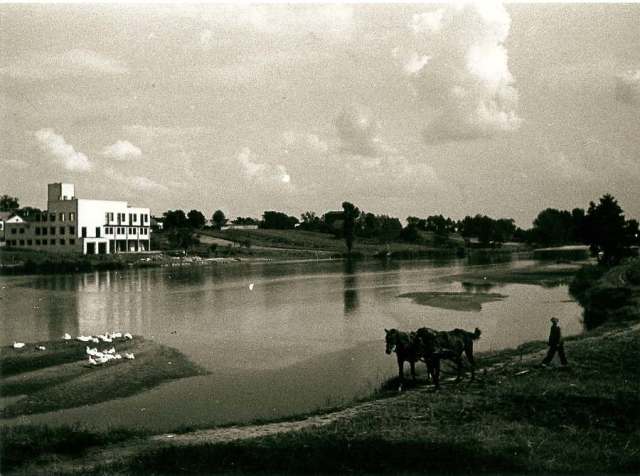 In the late 1930s. Uniejow, a small town located in western part of Poland, still has the same appearance like in the last days of Russian rule, around 1914. This medieval city, located on the eastern bank of Warta river, with medieval parish church next to the incoherent tenements and village-like houses facing the town square, had its moment of glory around 1500, when archbishopric of Gniezno possessed one of its residences here, located in the medieval castle on the left bank of Warta. But centuries later, around 1900, famous writer Maria Konopnicka called Uniejow a place “something between town and village”, stressing its stagnation and urban decay under the Russian rule. Uniejow both from the turn of the 19/20th centuries and decades later, was one of those sleepy towns that we used to call “province”. Its inhabitants worked on their small farms or in local handicraft business, mostly as their parents and ancestors did in past.

To overcome rising social tensions and effects of the 1929 Great Depression, many governments across the globe established versions of the “new deal” policies. To say it briefly, one of the most popular ideas was inauguration of many government-aided investments in industry, infrastructure and urban renewal. Around 1935 inhabitants of Uniejow were able to witness new public projects commissioned by local and state authorities in Turek, the nearest medium city in this area. Public architecture took a crucial part in some of the vital projects initiated in prewar Poland to enhance economic power and urban growth of  incoherently developed parts of the country. A couple of months before the German invasion of Poland in September 1939, also Uniejow was given a new chance: Prime Minister Felicjan Sławoj-Składkowski visited the city in February to meet local authorities and initiate financial aid supporting new public investments: primary school building and the more interesting one, Uniejow House of The People (dom ludowy).

This a little bit inadequate translation does not really make clear its role, which could be seen as a local civic centre. New structure, located almost on the beach across the river, south to the old town, was designed to house many institutions, but all of them crucial to the social and national policies of the time: a meeting place with auditorium, fire department with observation tower, water sports club (some hotel rooms also included) and probably one of the popular paramilitary organizations supported by the state. Standing between the river bank and the slope where Uniejow is located, new structure – designed according to modernist principles by unknown architects – initiated new connection between the city and the river. Its white walls, executed in local limestone called “wapień rożniatowski”, can be seen (similarly in the case of the public school building) as an outpost of state-supported modernization of Uniejow, a perspective  to be materialized in the early 1940s. How this “white house” of civic network and socialization in the name of state ideology (nation, military power, modernity – to give only some keywords the very difficult circumstances of the late 1930s. Europe), connected with new model of life (where sport activities, water – as a symbol of health and sanitation – where crucial) could change the image of this remote city?

After the Fall of 1939, the building remained unfinished until 1942, where Nazi administration demolished its structure, gaining materials for military purposes.

Since then there has been many interruptions in the process of modernization/redevelopment of Uniejów. (I hope that I will share some remarks on them with you later on). Recently, city has been turned by local authorities – by obtaining grants from EU initiatives – into a famous SPA Resort, with huge thermal baths complex, cultural center and some luxury hotels.

While visiting Uniejow during incoming spring you will see the new “Hotel Uniejow” on the right bank of the river, nearly in the same place as the prewar “House of the People” stood:

The new hotel seen from the beach next to the SPA Resort. Photo by author.

To read more about other projects of urban and social change in Uniejow, including recent development of the holiday resort, compare “W Uniejowie” and “Uniejowskie strony” magazines, both available here.