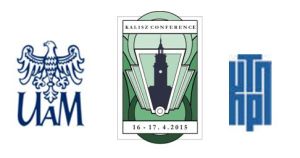 Organisers: The Faculty of Pedagogy and Fine Arts Adam Mickiewicz University in Poznań / Kalisz Society of Friends of Sciences

In the first days of World War I, European towns and cities on the Western and Eastern front faced unprecedented threat to their architecture and historical landscape: the modern war. Between 7th and 22nd August 1914, German troops plundered and burned down the historical core of Kalisz, an industrial town on the borders of the former Polish Kingdom under the Russian rule. Dramatic destruction of Kalisz, were more than 400 buildings, including the recently constructed town hall and the municipal theatre were set on fire after being plundered – became an epitome of the wartime atrocity in the international media. The ruins of this town, known as the oldest Polish settlement (mentioned in Roman sources from the second century A.D.), very quickly became a ground for reconstruction and modernisation by means of urban and architectural projects. The 1916 competition, organized by the Warsaw Circle of Architects, was aimed to attract the attention of the Polish architectural scene so as to address the problems of the future urban structure of Kalisz, and to design a project of historical recreation of its medieval core. Along with projects and legal regulations issued by German Occupationary Administration in the Congress Kingdom, these studies played a crucial role in the post-war reconstruction of the town in modern, but also “national” forms to shape “Polish” identity of Kalisz – concieved to be the oldest town in Poland. An analysis of initiatives up to 1918, such as municipal projects and endeavours, introduction of German-based building laws, or discussions concerning the 1800 style in Kalisz, supplies evidence of political competition behind the proposed architectural and urban renderings of the town, with German and Polish visions of history as the main rival ideas. But the difficult process of reconstruction in the 1920s and 1930s also involved a complicated network of legal issues, political ambitions and competing ideas as well as problems of social, ethnical and class-related nature. Incoherent and unfinished projects, the uncertain issues of the national styleto be introduced and goals to make the restored town also a modern one – with proper infrastructure, communication and sanitation – provide the main pieces of evidence of the Kalisz reconstruction period, where the cases of the new town hall and the theatre constitute material for broad case studies.

Kalisz, given here as a starting point, an example of a case study, or an inspiration, also illustrates the concept of an interesting historical project of shaping identity through architecture and urbanism. Restoration of European towns and cities destroyed between 1914-1918, seen as an architectural, political or social network of projects and policies will be the focus of this conference. The organisers would like to invite art, architecture, urbanism and preservation movement historians to send their submissions examining how WWI impacted the historical urban landscape in Europe and how it changed the role of preservation and historical reconstruction in theory and practice. Papers aiming to explore nation-oriented, identity architecture and planning as tools in restoration of historical towns and cities in Benelux, France, Poland, Germany or in local, state and broad European contexts will be welcomed.

The key issues of our Symposium are:

–        Conservation/preservation movement theories and their impact on renovation and post-WWI reconstruction of historical towns and cities in Europe in legal, theoretical and practical issues;

–        Interwar reconstructions – were they crucial to social, cultural and national narratives of industrial, nation-based societies? How social actors of restoration: urban planners, preservationists, architects, authorities and citizens negotiated the reconstruction schemes and their implementation?

–        Shaping history: new identities. Urban reconstruction and architecture as a tools of modern, nation-based policies. How did historical narrative and national politics shaped the improved historical towns and cities? What kind of history/national legend was introduced through architectural narratives?

We invite you to send proposals for 20-minute papers – please fill enclosed form with a 250-word abstract and a briefcurriculum vitae, including mailing adress, telephone number, e-mail address and affiliation.

Please note, that proposals may be e-mailed or sent by post – e-mail submission is preferred (DOC, DOCX, RTF, PDF files).

Accepted papers will be selected competitively on the basis of the abstracts.
The Organisers will notify the Authors about a successful submission in August, 2014.

The accepted Authors will send summaries of the papers before November 30., 2014.

The symposium volume will be prepared in 2015, according to the full versions of papers and discussions.

During the Conference, a guided, conversational tour through Kalisz interwar old town will be organised by the Art & Culture Studies Section of The Kalisz Society of Friends of Arts and Sciences.

Conference is free of charge, but Organizers do not cover transportation and accomodation costs.

← A Conversation with Wanda Bubriski
Between spa and entertainment park. The Architecture of the recently established Spa Resort in Uniejów as the space of the „experience economy”. →